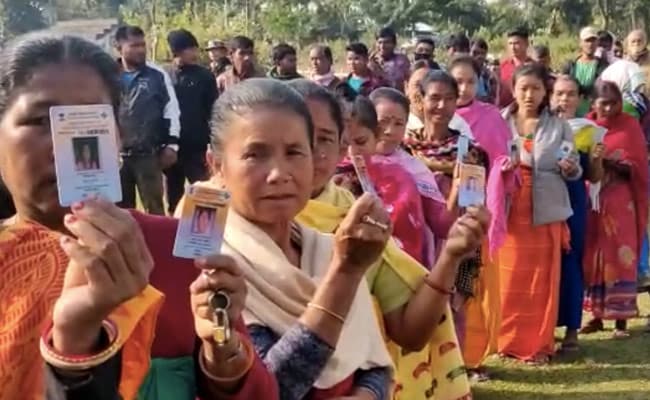 Counting for both the phases will be held on December 12 at 8 am.

Polling for the 40-member Bodo Territorial Council (BTC) began on Monday morning in the first phase, with election officials and only a section of voters adhering to COVID-19 protocols.

Till 11.30 pm, 34 per cent votes were cast out of a total of 13,64,018 electors, who will decide the fate of 130 candidates for 21 constituencies spread across Udalguri and Baksa districts.

An official of the Assam State Election Commission (ASEC) said voting through paper ballot started from 7:30 am and will continue till 4:30 pm at 1,739 polling stations.

Safety protocols like wearing masks, maintaining social distancing inside the booth and frequent sanitisation are largely being followed, though many voters were seen flouting the norms by not sporting face covers and huddling in groups.

Even senior leaders like BJP’s Biswajit Daimary, who recently resigned from Rajya Sabha and shifted sides from the BPF, and some other candidates reportedly cast their votes without wearing masks.

The second phase of polling for 19 constituencies will take place on December 10, when 10,23,404 voters will decide the future of 111 candidates by exercising their franchise across 1,407 polling stations in Kokrajhar and Chirang districts.

Counting for both the phases will be held on December 12 at 8 am.

Out of the total 3,164 polling booths, the authorities have marked 606 as very sensitive and 1,266 as sensitive, and put in place tight security measures, an ASEC official said.

A total of 23,87,422 electors will vote to elect their representatives for the local council, formed in 2003 and elections being held since 2005.

The BTC election was scheduled on April 4, but it was postponed indefinitely due to the COVID-19 pandemic.

Subsequently, Assam Governor Jagdish Mukhi assumed administration of the council on the expiry of its five-year term on April 27.

In the keenly-followed contest, Hagrama Mohilary-led ruling Bodoland People’s Front (BPF) is trying hard to save its 15-year-old BTC government, while state ally BJP is vying to dethrone its partner from the Bodoland Territorial Region (BTR).

The BJP and BPF are contesting separately and the parties were engaged in a bitter campaign, as leaders of both sides exchanged unparliamentary words.

BJP is running its first state government in Assam in alliance with the BPF and the Asom Gana Parishad (AGP).

United People’s Party Liberal (UPPL) is another strong outfit, with its supremo Pramod Boro, who joined the party from the All Bodo Students Union (ABSU), touted to be a strong contender for the post of Chief  Executive Member, the head of BTC.

Other parties like the Gana Suraksha Party (GSP), Congress-AIUDF alliance and scores of independent candidates are also in the fray.