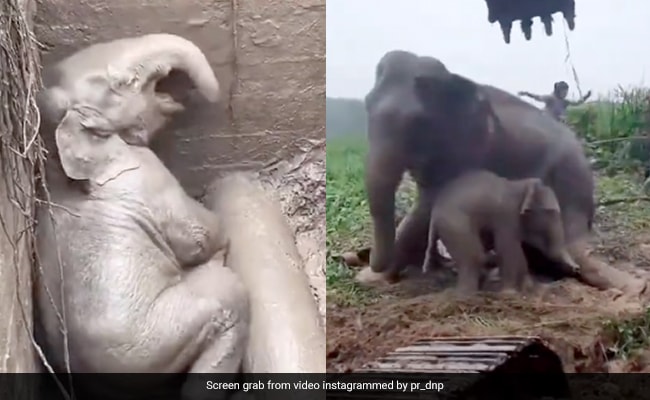 Picture shows rescue of a baby elephant from a manhole in Thailand.

A video going viral on social media shows the dramatic rescue of a baby elephant from a manhole in Thailand. The veterinarians used a number of tools, including a boom lift, to pull the calf out while its mother was sedated to allow the rescue operation to continue, CBS News said in a report.

The operation was carried out in the early hours of Wednesday, after authorities got to know about that calf that had fallen into a drainage trench on the outskirts of the Royal Hills golf course in Nakhon Nayok province, the outlet further said in the report.

Its worried mother, thought to be part of an elephant herd passing through the adjacent bush, stayed with the child, which was unable to climb out of the deep pit.

A passing resident noticed the elephants and immediately informed wildlife officials and Khao Yai National Park authorities about their suffering.

Due to the presence of the young elephant’s frightened mother, rescuers were originally unable to save it and were forced to tranquillise the mother elephant.

The video of the rescue operation has been shared by several news agenies and and social media platforms, including Reddit. The national park has also posted an Instagram story on it.

Rescuers used a truck-mounted crane to take the mother out before crawling on top of her to perform CPR as a digger pushed away ground so the nervous calf could climb out of the slick mud.

Dr Chananya Kanchanasarak, a veterinarian at the Khao Yai National Park, said, “It was impossible to get near the baby while the mother was nearby so we gave her three doses of tranquillisers but she moved towards her baby before passing out and hit her head.”

The calf was reunited with its mother after she was successfully revived and both the animals returned to the wild.

It took about three hours to finish the rescue operation, according to The Guardian.