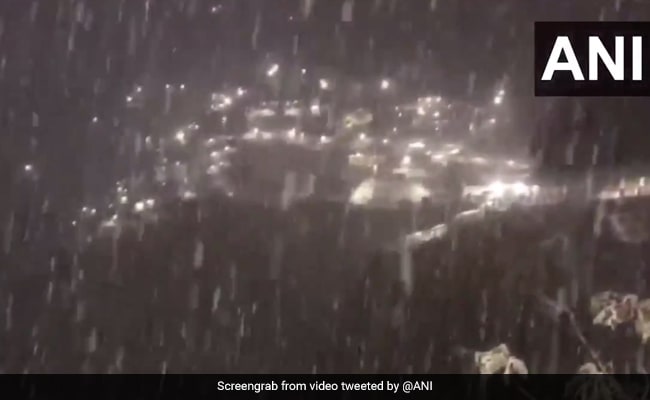 Many high-altitude areas in the Union Territory witnessed snowfall.

The famous cave shrine of Mata Vaishno Devi atop the Trikuta Hills in Jammu and Kashmir’s Reasi district witnessed its first snowfall this season on Sunday, officials said.

There was no disruption in movement of devotees, they said.

Many high-altitude areas in the Union Territory witnessed snowfall, while the plains, including Jammu city, received intermittent rains amid heavy cloud cover during most part of the day.

The snowfall on the Trikuta Hills, including at the ”Bhawan” (sanctum sanctorum) of started around 5.30 pm and lasted for nearly half-an-hour, the officials said.

They said the weather at the shrine remained cloudy with intermittent spells of rainfall earlier during the day.

The pilgrimage to the shrine continued and the devotees were also seen enjoying the snowfall, the officials said.

Jammu also recorded a dip of two notches in the day temperature which settled at 17.2 degrees Celsius – 1.8 degrees below the normal, a spokesman of the MeT department said.

He said the night temperature in Jammu was 4.2 degrees Celsius which is also 3.2 degrees below season’s average.