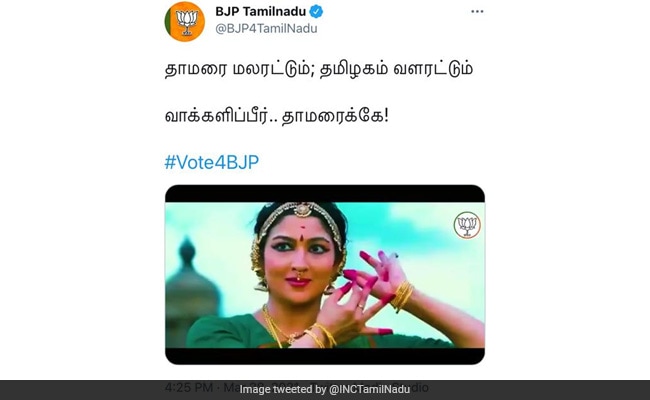 Bharatanatyam artiste Srinidhi Chidambaram hit out at Tamil Nadu BJP on Tuesday night after the party – as part of its campaign for next month’s Assembly election – tweeted a still of her dancing to ‘SemMozhi’ – a song in praise of the Tamil language that was written by former Chief Minister M Karunanidhi, whose DMK is in opposition to the ruling BJP-AIADMK government in the state.

With the still the BJP posted a message in Tamil: “Let the lotus bloom; let Tamil Nadu grow. Come vote… only for the lotus (the BJP’s symbol).” The tweet – posted on Sunday – has been deleted.

An irritated Ms Chidambaram, who is also the wife of Congress MP Karti Chidambaram and daughter-in-law of former Union Minister P Chidambaram, snapped back: “Ridiculous that the BJP (she tagged the opposition party’s central account) has used my image for their propaganda.”

For good measure she posted in Tamil too, saying: “The lotus will never bloom in Tamil Nadu.”

Ms Chidambaram’s team clarified that the still was from a performance for an edition of the World Classical Tamil Conference that was held over a decade ago.

They have used a portion of Bharatanatyam performed by Srinidhi Karti Chidambaram in their election promo.

She had performed this 10 years back for the “Semmozhi” song penned by M Karunanidhi and composed by AR Rahman. #TamilNaduElectionspic.twitter.com/dlEsNFR8rx

The Tamil Nadu BJP has blamed the ‘faux pas’ on a vendor who, the party says, took the video from a government website. There was, however, no violation, the party said.

The Congress, though, tweeted a reminder to the BJP that they could not use Ms Chidambaram’s image to endorse their “lies and propaganda” without her permission.

“Dear Tamil Nadu BJP, we understand ‘consent’ is a difficult concept for you to understand but you cannot use Mrs Srinidhi Karti Chidambaram’s image without her permission. All you’ve done is prove that your campaign is full of lies and propaganda,” the party posted.

Dear @BJP4TamilNadu, we understand ‘consent’ is a difficult concept for you to understand, but you cannot use Mrs Srinidhi Karti Chidambaram’s image without her permission. All you’ve done is prove that your campaign is full of lies & propaganda. pic.twitter.com/CTYSK9S9Qw

Political rhetoric has been ramped up in the state as voting day – April 6 – nears.

Tamil Nadu votes in a single phase next month, with results due May 2.

The ruling AIADMK has allied with the BJP and the opposition DMK has renewed ties with the Congress – with which it swept 38 of 39 seats in the 2019 Lok Sabha election.