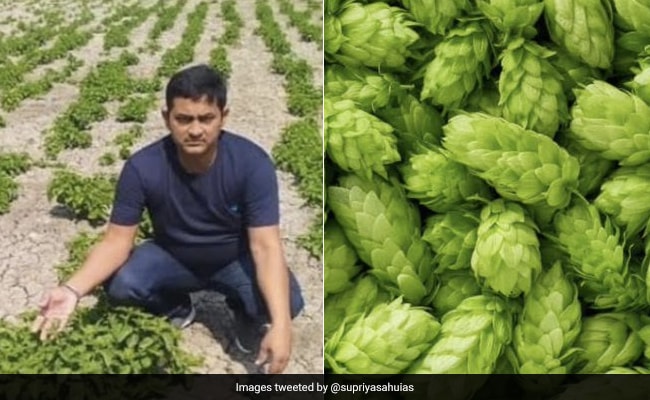 The story on hop shoots was viral after a tweet by an IAS officer along with a news report.

Claims that a vegetable called hop shoots is being cultivated by a farmer in Bihar’s Aurangabad district and sold for Rs. 1 lakh per kilogram have reportedly emerged as false. After a tweet by an IAS officer with two photos and quoting a news report, the story was widely shared on social media, with many people talking about the conical vegetable online.

“One kilogram of this vegetable costs about Rs 1 lakh! World’s costliest vegetable,’hop-shoots’ is being cultivated by Amresh Singh, an enterprising farmer from Bihar, the first one in India. Can be a game changer for Indian farmers,” IAS officer Supriya Sahu had tweeted on March 31. The tweet received over 24,000 “likes” and was retweeted over 5,000 times.

A team from Hindi newspaper Dainik Jagran visited the Bihar village of Amresh Singh, the man at the heart of the story, on Friday, and found that no such crop was being grown there. Local people said they had never heard of such a crop being grown in the area, according to the report.

Contacted on phone, Mr Singh reportedly said crop was in Nalanda district, about 172 km away. When the newspaper team went to Naladna, he said the crop is in Aurangabad.

Saurabh Jorwal, District Magistrate of Aurangabad, told Dainik Jagran, “Some officials from Patna asked about the hop shoots crop. There is no such cultivation in Aurangabad district.”

According to Jagran, Amresh Singh has grown black rice and wheat in the past but not hop shoots.

What are hop shoots?

The hop – called humulus lupulus – is a perennial plant. A native of North America and Europe, hop shoots were believed to be a weed until its properties were known. According to the website agrifarming.in, hop shoots have ”antibacterial effects” and are used for ”bittering”, ”flavouring” and as a ”stability agent in beer”.