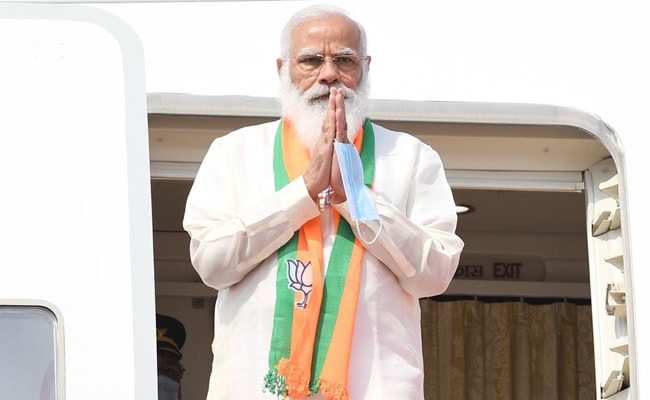 West Bengal Assembly Election: PM Modi will address some 20 rallies in Bengal till the polls.

Prime Minister Narendra Modi arrived in Kolkata this afternoon to address a massive rally, his first in the state after the Assembly poll dates were announced last week. The anticipation over his visit was only fueled further by popular actor Mithun Chakraborty’s presence at the venue. The star joined the BJP shortly before the main event began at the city’s Brigade Parade Ground.

Landed in Kolkata. On my way to the massive party rally. Looking forward to being among Party Karyakartas and the wonderful people of West Bengal.

The Prime Minister landed in the city around 2pm, though the massive crowd had gathered at the venue hours before.

Mr Chakraborty’s joining the BJP came at the end of much speculation even over his attendance at the event. “I have spoken with him (Mr Chakraborty) over the telephone, he’s going to come today. I will be able to make a comment only after a detailed discussion with him,” Kailash Vijayavargiya, the party’s state in-charge who had met up with the star yesterday at his residence in the state capital’s Belgachia locality, had said.

In any case, the actor wasn’t the only one adorning the stage in Kolkata today. The event featured many folk artistes, ANI reported. Along with the 72-feet long main stage, two other stages have also been set up, one for Tollywood actors and another for other important personalities. The two other stages are 48-feet length, 24-feet width and 7-feet height.

Over 1,500 CCTV cameras have been installed across the city for security purposes. Drone cameras will also be used to monitor the venue. The rally is expected to be attended by at least 7 lakh people, sources told ANI. Three main barricades have been strategically placed toward the main stage for security purpose. Barricades and a helipad has been created at the Race Course near the Brigade Ground.

This is likely to be the first of the Prime Minister’s 20-odd rallies across the state in the run-up to the polls, BJP sources informed ANI. It comes a day after the party announced its first list of 57 candidates for the polls and two days after incumbent Trinamool Congress announced its own 291 candidates, leaving three for its ally Gorkha Janmukti Morcha.

Elections to West Bengal’s 294-seat Assembly are scheduled to be held in eight phases from March 27 to April 29 and the results will be declared on May 2.

After winning three seats in the 2016 Assembly election, the BJP had made deep inroads into the state by the 2019 Lok Sabha elections, winning 18 of the 42 seats and reducing Trinamool’s numbers to 22. The Congress won two while the Left got none.