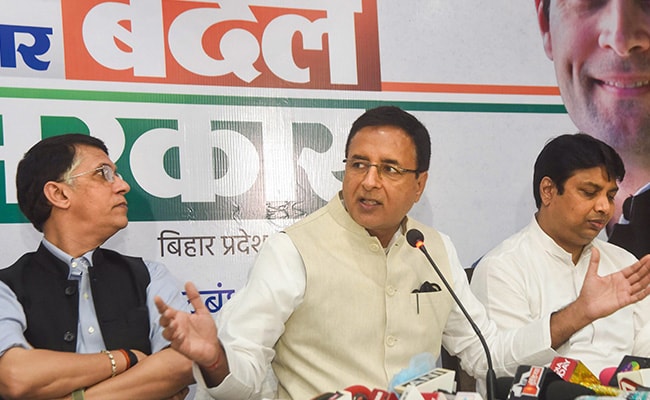 The BJP manifesto for Bihar is full of gimmicks, the Congress said.

The Congress on Thursday scoffed at the BJP for promising 19 lakh jobs in Bihar and a two-fold rise in the state’s GDP over the next five years if it wins the elections starting next week, dubbing it “yet another jumla” – a reference to Prime Minister Narendra Modi’s 2014 campaign promise of bringing back black money stashed abroad.

“What do we make of claims about GDP made by a woman under whom the country’s growth rate has nosedived from 10 per cent to minus 23 per cent,” Congress leader Randeep Singh Surjewala said, hitting out at Union Finance Minister Nirmala Sitharaman, who released the BJP’s manifesto for assembly elections earlier in the day.

The Congress leader also targeted the National Democratic Alliance (NDA), which rules the centre as well as the state, by playing video clips of the prime minister and Chief Minister Nitish Kumar blasting each other when their parties were not allies.

The Janata Dal (United) or (JDU) chief, who is running for his fourth consecutive term, had won the 2015 assembly elections as the chief ministerial candidate of the Grand Alliance which included the Congress and Lalu Prasad’s Rashtriya Janata Dal (RJD).

“The BJP manifesto is full of gimmicks and comes nowhere close to ours released the day before. Instead of coming out with yet another jumla (gimmick) of 19 lakh jobs, the BJP would have done better by stating what came of the promise made by Modi before the 2014 general elections to provide 2 crore jobs per year,” Mr Surjewala said.

“Had they been able to deliver on their promises, 12 crore people would have got employment across the country in the last six years. Bihar too would have benefited in due course. But since they have failed, they cannot be trusted anymore,” he said.

The Congress leader alleged the JDU-BJP combine has driven the state to the “brink of ruin” in the last 15 years and said Mr Kumar, who is called “sushasan babu” for his claims of ushering in good governance deserved the epithet “phisaddi babu” or laggard.

“It is not just we who say that Nitish Kumar has been a non-performer. A recent report of the Niti Aayog, which functions under the Modi government at the centre, speaks volumes about the woeful situation of Bihar where students dropout rate is high, the number of qualified teachers is low, malnutrition exists on an alarming scale,” he said.

Bihar will vote in three phases on October 28, November 3 and 7 for a new government and the results will be announced on November 10.

(With inputs from PTI)