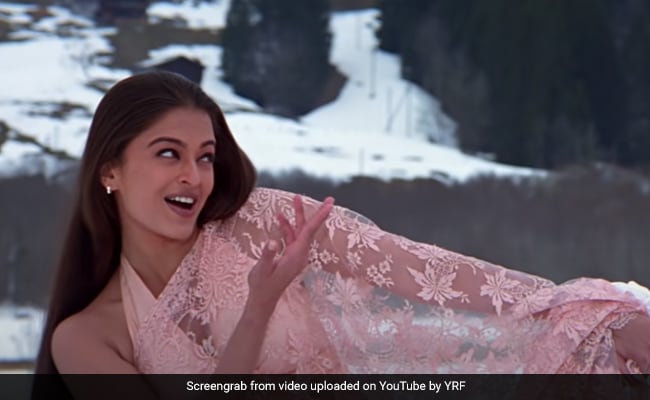 Aishwarya Rai Bachchan in a still from Mohabbatein. (courtesy YouTube

On the 20th anniversary of Aditya Chopra’s Mohabbatein, the film’s lead actors and actresses shared cherished memories from the film. Farah Khan, who had choreographed songs for the film, shared her experiences and what went into making the songs special. During an interview with PInkvilla, Farah Khan revealed that Aishwarya Rai Bachchan, who starred as SRK’s love interest and Amitabh Bachchan’s daughter Megha in the film, shot for the songs in lace sarees in freezing cold temperature and never complained about it. “Ash being a thorough professional, freezing in London, wearing a white lace saree, drenched, and she would not complain,” Farah Khan told Pinkvilla.

Farah Khan added, “Her and Shah Rukh’s chemistry is something else in the film and that whole poetry of Ek Ladki Thi Deewani Si think that has become almost iconic because of how they did it.”

Farah Khan added that during the shooting of the songs, she wasn’t aware that Aishwarya’s character Megha was a fragment of Raj Aryan (SRK)’s imagination. She added, “We were not supposed to know, at that point, whether Aishwarya was Shah Rukh’s imagination or not. He would see her in places and she was the spirit behind the love stories. We shot in London. We shot in freezing cold nights with rain and we went to Switzerland to shoot two songs, Humko Humise Chura Lo, which I think is one of the best songs in the film, really beautifully done.”