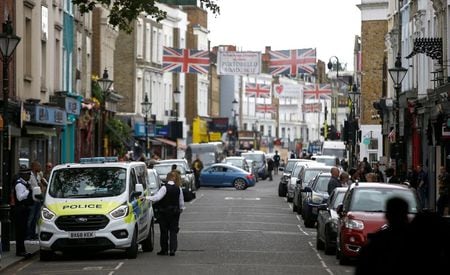 LONDON: Notting Hill Carnival, a highlight of the British summer, may have been cancelled this year because of the COVID-19 pandemic, but a couple of colourful individuals on Monday were determined to bring some festival spirit to west London’s quiet streets.

The carnival, seen as a symbol of interracial tolerance, dates back to the 1960s and celebrates Britain’s Afro-Caribbean community. It usually attracts more than a million visitors over the August Bank Holiday weekend, but its parade has been replaced this year by a virtual festival.

However, one man danced along the route of the procession on an unseasonably cold day on Monday in a purple headdress and shorts.

Separately, another man in a black and yellow outfit dodged London taxis as he celebrated the public holiday, which did not have the usual road closures in place.

Notting Hill’s streets, usually packed for the holiday, were virtually empty, and neither man had trouble maintaining social distancing during their informal processions.

London’s police have urged people to stay at home and avoid large gatherings over the holiday weekend, and no large gatherings related to the carnival had been reported by mid-afternoon on Monday.

Singer Adele stoked an online debate by posting a picture of herself wearing a Jamaica-flag bikini top with her hair in Bantu knots on Instagram, in honour of the carnival.

Some accused Adele, who is white and hails from London, of cultural appropriation, but opposition Labour lawmaker David Lammy said that the singer of hits such as “Hello” and “Someone Like You” had captured the carnival’s spirit.

Sushant Death Probe: Why Did SSR’s Family Deny That He Was Unwell? | News Epicentre | CNN News18

“This humbug totally misses the spirit of Notting Hill Carnival,” he said in a tweet in response to accusations of appropriation.

“Adele was born and raised in Tottenham, she gets it more than most. Thank you Adele. Forget the Haters.”