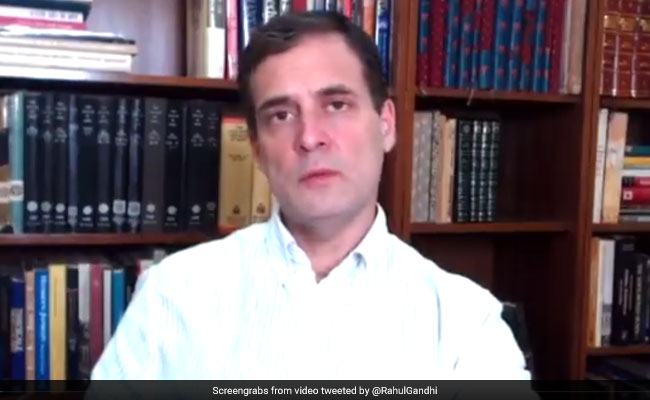 Shortly after Prime Minister Narendra Modi spoke Sunday afternoon about making “toys for the world”, Congress leader Rahul Gandhi took a sarcastic swipe at the Prime Minister and his calls for India to emerge as a “toy hub”.

JEE-NEET aspirants wanted the PM do ‘Pariksha Pe Charcha’ but the PM did ‘Khilone Pe Charcha’.#Mann_Ki_Nahi_Students_Ki_Baat

The Prime Minister, during his monthly radio address Mann ki Baat, declared toys were “very important for the development of children” and that India should become a global leader in its manufacturing.

“There has been a rich tradition of local toys in our country. There are many talented and skilled artisans who possess expertise in making good toys… India has the talent and the ability to become a toy hub by making toys for the entire world,” the Prime Minister was quoted by news agency ANI.

He also estimated the global toy market to be worth Rs 7 lakh crore and said that it was “not right” for India to have a “very small” share of that market.

On Friday the Congress MP said in a video posted on Twitter that the safety of NEET and JEE aspirants could not be compromised by the “failure of the government” to control the COVID-19 outbreak.

Describing the students as “the future”, Mr Gandhi demanded to know why “further pain should be imposed” on them and urged the government against forcing the student community to sit for the exams.

NEET-JEE aspirants’ safety should not compromised due to the failures of the Govt.

Govt must listen to all stakeholders and arrive at a consensus.#SpeakUpForStudentSafetypic.twitter.com/Y1CwfMhtHf

The conduct of JEE and NEET exams – for entrance to IIT and medical courses, respectively – during the pandemic has been challenged by students and concerned parties, who say health and safety must take precedence over academics at this time.

India has seen a deeply worrying surge in Covid cases over the past month and now has over 35 lakh confirmed infections, of which more than 63,000 are deaths and 7.65 lakh are active cases.

NEET and JEE are set to be held despite these concerns; the Supreme Court dismissed a petition by earlier this month to postpone them, declaring “careers of students could not be put in jeopardy“.

The government has released a list of guidelines to ensure safety of students and invigilators during the exams, but a group of opposition chief ministers have expressed concern that their governments would be blamed if, as is expected, Covid cases spike after mass public gatherings like the exams.

The same group – led by Bengal’s Mamata Banerjee and interim Congress chief Sonia Gandhi – have approached the top court seeking a review of the August 17 order permitting the exams.

With input from ANI