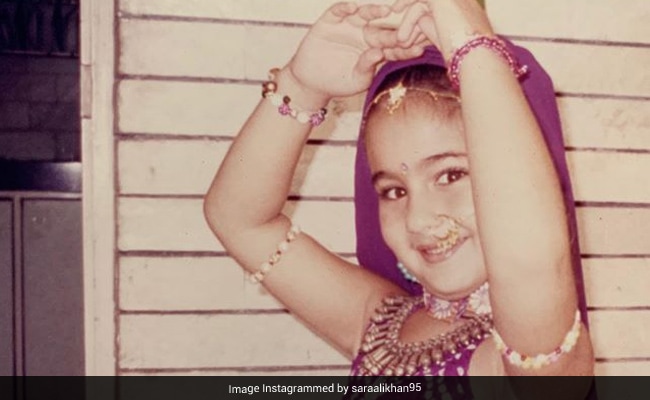 Sara Ali Khan, who loves sharing priceless throwback pictures of herself from her childhood album, made a trip down memory lane, again, on Saturday and shared a set of adorable photos of herself as a little munchkin. The actress, who always shares her pictures with quirky and fun-filled captions, did something similar in her latest post. “Bangle ke peeche,” she wrote while sharing childhood memories, which feature a very young version of Sara Ali Khan posing like a real star. She looks beyond adorable in a purple-coloured lehenga, which she paired with jewellery. Needless to say, Sara’s post stole the spotlight on the Internet.

Reacting to the actress’ post, her fans dropped comments such as “too cute” and “you look like a doll.”

Sara Ali Khan’s throwback pitara comprises million-dollar pictures of the actress with her mom Amrita Singh and brother Ibrahim Ali Khan. Last month, she shared a really adorable photo of herself, in which she can be seen dressed in a white outfit and with her hair tied in braids.

Meanwhile, also check other old pictures of Sara Ali Khan from her childhood:

Sara Ali Khan made her Bollywood debut with Kedarnath in 2018. She has since then appeared in two films – Simmba (alongside Ranveer Singh) and Love Aaj Kal (opposite Kartik Aaryan). She has Coolie No 1 and Atrangi Re lined-up. She will feature alongside Varun Dhawan in Coolie No 1 while Akshay Kumar and Dhanush will share screen space with her in Atrangi Re.