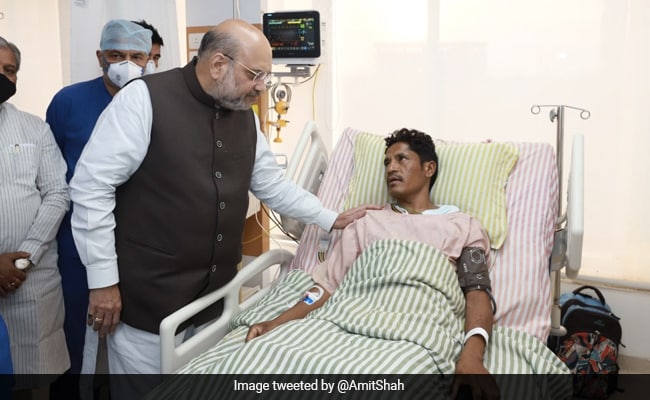 Amit Shah visits the camp of the CRPF at Basaguda in Bijapur, Chhattisgarh.

Two days after a Maoist attack left 22 security men dead in Chhattisgarh, Union Home Minister Amit Shah on Monday visited a CRPF camp in the remote Bastar region and exhorted jawans to continue their fight against the Maoist menace with courage and commitment.

He asked extremists to shun the path of violence and join the national mainstream.

Mr Shah’s visit to the camp of the Central Reserve Police Force (CRPF)’s 168th battalion at Basaguda in Bijapur district was viewed as a major morale booster for troops engaged in the decades-old fight against rebels in their bastion.

Basaguda is located around 450km from state capital Raipur and is about 20km away from the site of the April 3 Maoist attack.

Addressing the personnel at the camp, including those who were part of the team that came under the Maoist attack on Saturday, the home minister said the fight against ultras is not a personal one but a battle to bring peace and tranquility in the country.

“Today, I can only say that you have lost some of your friends but please have faith in the Government of India and the Chhattisgarh government. The objective for which the security personnel have laid down their lives will be achieved and well become victorious,” Mr Shah said.

‘When the mortal remains of the martyred security personnel were being sent to their native places today, I paid my respects and condolences. When these images were shown on television, people
across the country shed tears. The whole country is proud of you for the brave battle you have fought against the Maoists,” he said.

The home minister said ultras, too, suffered damage in the ensuing gun-battle, but did not provide details.

“We have suffered losses but damage was also inflicted on ultras. We should not forget that till a few years back the area where the combing operation (against Maoists on Saturday) was inaccessible and considered a den of Maoists. “Now we’ve entered those areas and carried out our operations,” he said.

Referring to the grievances raised by security personnel during their interaction, the home minister assured to look into them.

“There are some difficulties which you have raised. I assure you, all the issues raised by you will be addressed seriously and best possible facilities and assistance will be provided,” he added.

“Extremism has thwarted the development of the area. Neither schools can be built nor hospitals or colleges. We have to fight for the welfare of the people of the region,” Mr Shah said.

Pointing out that the government has been making efforts to persuade ultras to give up violence and join the national mainstream, he said: “They (Maoists) are welcomed if they lay down their arms.
“But if they continue to hold weapons then we don’t have an option (but to fight them).”

Hailing the role of security forces in controlling extremism, Mr Shah said: “In the past few years, several areas have been freed from the menace. But this region (south Bastar) has become an epicentre of Naxalism and you are posted here. It is your responsibility to continue to fight against the menace with the same courage and commitment that you displayed on Saturday till the victory is achieved.”

Later, Mr Shah had lunch with jawans. Chief Minister Bhupesh Baghel and senior police and CRPF officials were also present on the occasion.

Saturday’s Maoist attack took place between Jonaguda and Tekalguda villages along the border of Sukma and Bijapur districts in the Bastar region. As many as 31 security personnel were also injured in the ensuing gunfight.