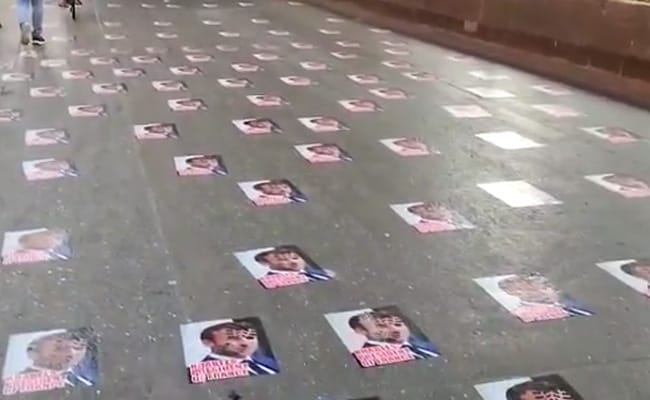 Posters of France President Emmanuel Macron – whose defence of cartoons depicting the Prophet Mohammed and description of Islam as “a religion in crisis” have angered several Muslim-majority nations – were pasted on the surface of Mumbai’s Muhammad Ali Road on Thursday.

Videos of vehicles driving over the posters and people walking over them have been shared online. Others show people marching to protest Mr Macron’s comments – with placards that read “Our Prophet Muhammad, Our Honour” – and one man hitting a poster of the French President with slippers.

The posters have triggered a political row in Maharashtra, with the opposition BJP hitting out at the ruling Shiv Sena for “supporting Islam terrorists” and demanding action against the protesters.

Although police swiftly removed the posters no case has been registered so far.

Similar protests have been held in Madhya Pradesh’s Bhopal (a Congress MLA participated), at the Aligarh Muslim University in UP and in Punjab’s Ludhiana. In addition, the hashtag #BoycottFrenchProducts was trending online.

All of this comes a day after Prime Minister Narendra Modi expressed solidarity with the victims of the knife attack at a church in the French city of Nice and backed Mr Macron’s call to fight terrorism.

PM Modi said: “I strongly condemn the recent terrorist attacks in France, including today’s heinous attack in Nice inside a church” and “India stands with France in the fight against terrorism”.

I strongly condemn the recent terrorist attacks in France, including today’s heinous attack in Nice inside a church. Our deepest and heartfelt condolences to the families of the victims and the people of France. India stands with France in the fight against terrorism.

Mr Macron later said “very clearly France is under attack” and was quoted by multiple foreign publications, including the BBC, as calling it an “Islamist terror attack”.

It is unclear, at this stage, if the Nice attack is connected to the controversy over the cartoons.

Protests against Mr Macron erupted first after he refused to criticise satirical magazine Charlie Hebdo for re-publishing cartoons of the Prophet Mohammad – cartoons originally published in 2015 that led to a terror attack on the magazine’s offices – citing “freedom of expression”.

Following the public beheading of a Paris teacher – who had shown students in his class the cartoons – Mr Macron said the teacher had been “killed because Islamists want our future” and promised that his government would intensify a crackdown on radical Islam.

Mr Macron has since become the subject of personal attacks, including those by Turkish President Recep Tayyip Erdogan and Iran’s supreme leader Ayatollah Ali Khamenei. He was also targeted by Pakistan Prime Minister Imran Khan, who accused his French counterpart of “attacking Islam”.

On Wednesday India strongly condemned the personal attacks against Mr Macron, calling it “a violation of the most basic standards of international discourse”. In a strongly-worded statement the Foreign Ministry also condemned the brutal terrorist attack that killed the teacher.

Caricatures of Mohammed are forbidden by Islam and such actions are regarded as blasphemy – an explosive issue in ultra-conservative Muslim-majority nations where anyone deemed to have committed such acts can face the death penalty.

Protests against Mr Macron and his comments have also broken out in Pakistan, Bangladesh and Lebanon, with tens of thousands of people taking to the streets, according to Agence France-Presse.