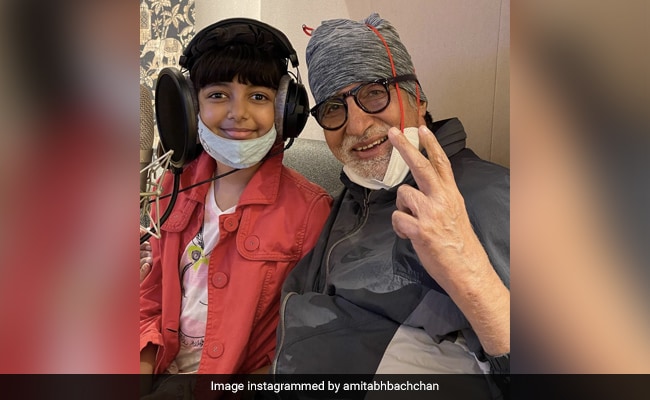 Amitabh Bachchan wanted to end the year on a positive note and seems like he will do just that. The 78-year-old actor shared a picture of his happy place – the studio. In one of the pictures, Big B  can be seen flashing a bright smile as he poses with granddaughter Aaradhya Bachchan from the studio. He captioned the post: “When granddaughter and grandfather get in front of the mic in the studio and make music.” In a separate tweet, the actor posted another picture (also from the studio), which featured his son Abhishek Bachchan, daughter-in-law Aishwarya Rai Bachchan and granddaughter Aaradhya. He wrote: ‘Tomorrow dawns and the celebrations begin but for what. It’s just another day another year… Big deal. Better off making music with the family.”

T 3768 – … tomorrow dawns .. and the celebrations begin .. but for what .. its just another day another year .. big deal !
Better off making music with the family .. pic.twitter.com/6Tt9uVufbp

On Thursday, Big B talked about his head banging skills in his Instagram post. Posting an uber-cool picture, he wrote: “So having failed the MJ routine they asked me to – in more recent times – attempt this, the rock head banger. Same result! Nothing other than the shades rocked. Do approve please… They are the same that got posted the other day.”

This year, Amitabh Bachchan had a single film release – Shoojit Sircar’s Gulabo Sitabo, co-starring Ayushmann Khurrana. The film released on OTT platform Amazon Prime Video. Big B recovered from COVID-19 in August and was busy with the TV quiz show Kaun Banega Crorepati 12. The actor has many upcoming projects lined up. Hope we get to see a lot more of Amitabh Bachchan in 2021.